Speedy Soft Digistudio v9.2.3.231.b.04.11.12
Speedy Soft Digistudio v9.2.3.231.b.04.11.12 英文正式版(數位相片展示軟體)
安裝序號:
check crack\serial.txt
內容說明:
DigiStudio是一套數位相片展示軟體。它可將數位相片以幻燈片的形式播出，使用
者可以插入自定的文字和動畫，並提供有多種特殊效果。
英文說明:
Your digital camera can probably generate also small videos. An animal
scene, a waterfall, an arrival of railway train, a musical scene can bring
not only life in the static slide show, but also the original sound. Even
videos on DVD can be played under certain conditions before the static
picture background. An especially high image quality deliver the already
mentioned vector animations. They adapt themselves to the screen
resolution and can produce in the full screen every conceivable scene
excellently. In addition here one more example. With these possibilities
rises DIGISTUDIO well over the usual conventional and digital slide show.

Every slide show can show pictures. To show text looks clearly different.
But only with text the slide show also in case of the consideration by
third becomes usable. If you want to give away a CD of your holiday
impressions, text is inalienable, e.g., in the form of subtitles. But also
the wish for show titles and intertitles with different graphic emphasis
is legitimate. Or how one gets, for example, a legend, a poem or quite
simply a chapter from the travel diary in the slid show. DIGISTUDIO offers
unique and elegant solutions. But DIGISTUDIO offers even more on the
subject text.

How often it gives for a motive one or more detail images which could
stretch the slide show as independent pictures artificially and don't
express the connection so well. For example, a castle and his
architectural details or a mountain pasture and an insect or a natural
monument and the tip board. DIGISTUDIO can indicate at first the main
picture and then fade in partial pictures successively in eligible size,
position and border design. Indeed, this feature substitutes not a
multivision show, however, brings change and movement in the primitive
sequence of same-format pictures.

Digital technique replaces the classical slide. No more blur by thermal
expansion of the film footage. No dust, no scratches, no fading of the
colors. No changes of the magazin of slides, no jam in the projector.
Inplace of many magazins of slides one CD is enough, which starts
automatically without preparation and which one can also multiply and give
away.

DIGISTUDIO can fully hide the computer image. Windows screen becomes
invisible befor starting and after ending show. Invisible volume control.
Switched off Mouse cursor. Instead operating with mouse and pop up menus
is it possible to operate with keypad. Switched on or off attractive
special cursor instead of laser pointer.

DIGISTUDIO guarantees a liveliness atypical for Internet slide shows. Even
if for reasons of the loading times not all Features of the local
DIGISTUDIO presentation are available, essential additions can be used
fully like title and final animation, subtitle, cross fading, individual
vector animations and animated text spots. The pictures are built up not
bit by bit, but are preloaded and indicated only when they are fully
loaded. An scroll bar illustrates the loading state. A browser version
with full achievement circumference is available, by the way, for the
Intranet.
圖片說明: 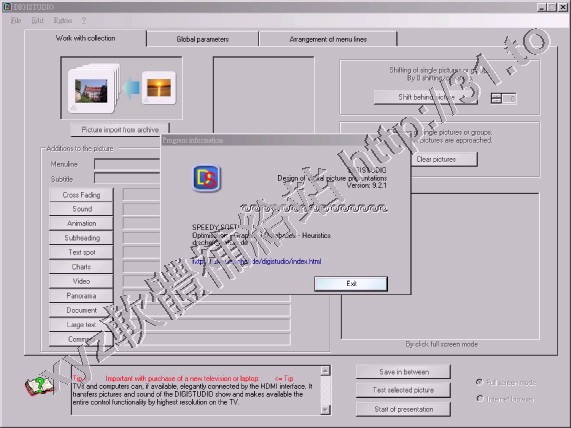